An Introduction to the Focus Flow 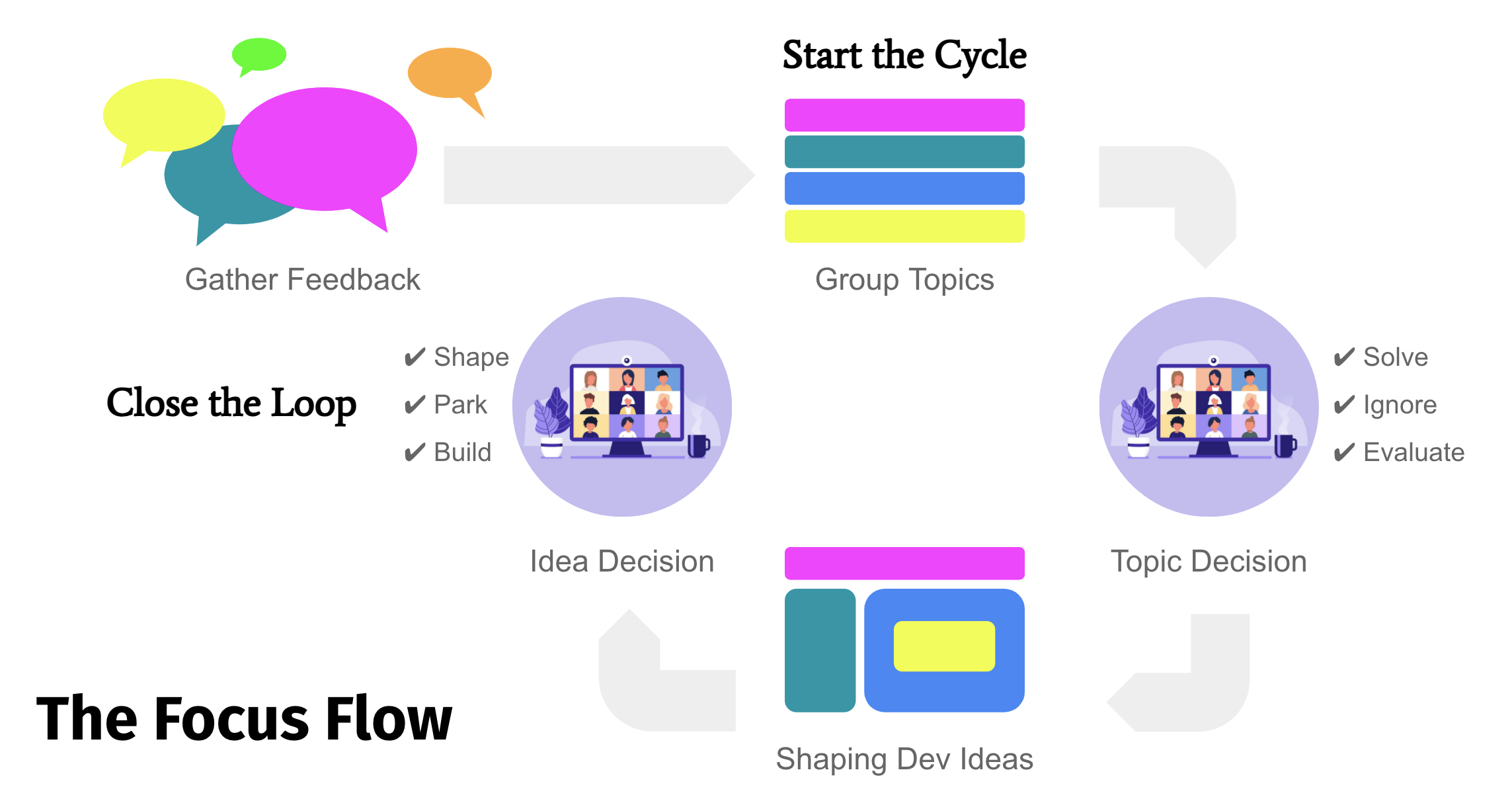 Why use the Focus Flow?

Agile is the dominant software development method. However, Agile only focuses on how to build, not what to build. The whole process starts with the idea that the product owner has prioritized the backlog. Yet, backlog prioritization is the missing first half of the Agile process.

The Focus Flow is based on the idea that priority is feedback driven. Companies discover priority from mining feedback from customers and coworkers. Feedback includes feature requests, complaints, breaking news, and other ideas. Generally, the process is:

It works in harmony with company priorities in two ways:

A Flow is the full sequence of events for processing feedback into dev ideas. Ideally, this sequence is something that a team does rapidly enough to stay on top of feedback, while still allowing time for developing it into dev ideas. Two weeks is a good time period to start with.

A topic is a related group of feedback. It can be confusing at first on how to decide which feedback to group together, what to call the group, and how to describe the feedback. When customers and coworkers are providing feedback, it generally comes in four levels:

Deciding what to do about the feedback topics is a team effort. Meeting participants should be as cross-functional as possible to get a holistic view that informs the decision making. Excluding the product manager, ideally there are five to seven stakeholders each from a different department or functional area. Commonly this means making sure to have participants from customer support, sales/marketing, and engineering.

The product manager will select the list of topics. Generally, the approach to topic selection should be:

In the Topic Decision meeting, the product manager will take the team through the list of topics one by one. For each topic, the team will decide one of the following outcomes:

A good amount of time to allocate to the Topic Decision meeting is 30 to 60 minutes. It’s important that the meeting is long enough to conclude on the topics with the most feedback, highest customer need, and key customers. Teams with lots of feedback are most likely to have a long tail of topics with only a single piece of feedback. To speed up meetings, they may want to adopt rules like:

Dev Ideas start with a summary of the feedback in the form of a problem statement and a high-level description of the solution. They should not be in-depth product specifications with high fidelity mockups. They should have just enough detail to allow the team to roughly estimate the potential value and effort.

To provide context, attach all relevant topics to the dev idea. This will make it easy to trace anything that ships all the way back to the people who provided the original feedback. It also allows anyone who is editing or reading the dev idea to look back at what was said.

Estimating the Value and Effort

Once ideas are segmented in this manner, it becomes easier to discuss the pros and cons of dev ideas within the same quadrant. For example, high value and high effort dev ideas are projects that could make a significant revenue impact. A discussion about which one to bet on could be productive. Whereas, comparing ideas across quadrants is challenging because the scale of value and effort is so different. Rather than discuss whether to do big things or small things, it’s more useful for teams to discuss which big/small things to do and how many small things can we do if we take on a big thing.

Teams may prefer to estimate value and effort together. It can be useful to hear multiple points of view to get a more accurate picture for a dev ideas potential value and effort.

When estimating, the product manager should also capture how confident the team feels about the estimate. Low, medium and high is generally a good enough confidence scale. When selecting low or medium, a best practice is to document anything that could increase your confidence. When deciding between two dev ideas in the future, the team may want to derisk a decision by increasing the confidence level in the estimates. At that time, it’s helpful to refer back to what would increase the confidence in an estimate in order to take action on it.

Like Topic Decision, deciding what to do about the dev ideas is a team effort. Ideally, this includes the same set of stakeholders as the Topic Decision meeting.

The product manager will select the list of dev ideas. Generally, the approach to dev idea selection should be:

In the Idea Decision meeting, the product manager will take the team through the list of dev ideas one by one. For each dev idea, the team will decide one of the following outcomes:

For any dev idea that is parked, the product manager should capture the reason.

For all dev ideas that are set to Build, the product manager will create a corresponding project, epic, or similar artifact in their release/project management system. With Upfocus, you can push your dev idea into Jira, GitHub, or Asana. You could also add a project link to another other system.

Updating From Build to Shipped

When closing the Flow, check in on the project status of all dev ideas set to Build. If any of those projects have been completed, then update that dev idea to Shipped. It’s a good practice to include a link to release notes in the originating dev idea.

When a dev idea has been set to Build or Ship, consider notifying the people who have feedback attached to those dev ideas.